Our very own Rebecca Pearce spent three months volunteering in Tanzania with charity organisation Raleigh International. While she was there, she used her love for photography to capture moments in her host home and her project, leaving them behind as keepsakes for the community that hosted her. Here she shares how she did it.

For as long as I can remember I have wanted to travel and contribute to the world in a positive way, either by helping others or working on environmental projects. I found myself wondering how I could combine this with photography.

I packed my bag with 50 Polaroid shots

I have always had an interest in snapshots – photographs that don’t necessarily follow the rules of composition and reflect unplanned events. Throughout university I looked into family albums and snapshots and it gave me an idea for a project I wanted to try out.

Before leaving for Tanzania on a Raleigh International placement helping educate communities on the importance of safe water and sanitation, I packed my camera with enough film for 50 shots.

I didn’t want to simply take shots of people and leave them with nothing to show for it.

Instead, I thought that by taking Polaroids and sharing these with the community that I lived with, it would have more of a personal approach and they would be able to have their own family album by the time I left.

Tanzania is an incredibly beautiful country with equally beautiful people. I planned to capture the culture, our project’s progression and the people that soon became my friends.

But a big challenge was integrating my photography with the community in a positive way. 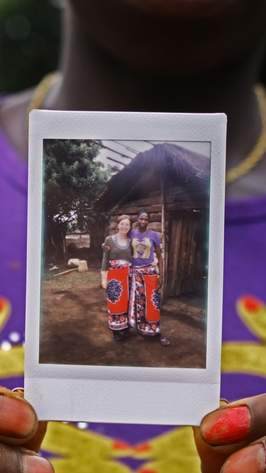 When we first arrived, the community were unsure of us. We needed to build relationships and I didn’t feel comfortable taking photos of people without a level of trust. After all, I was living in a family home and I didn’t speak Swahili, as much as I tried. Luckily I always had my Tanzanian kaka (brother) Mauka, by my side.

Mauka is a great friend and was my rock during my time there. He was patient with trying to teach me the language and always translated when our family was around. Over the three months I was able to ease into taking photographs, and my struggle with the language was reason for laughter with my family.

Soon they grew used to how my camera was always by my side and asked me to take photos of them so frequently, it became natural.

What caught my eye

My favourite photograph has to be of my dada (sister) in the kitchen. This particular shot came out really well. I managed to snap her just as she was giggling and about to shut the door on me. I love that behind her you can see the wooden hut that was my family kitchen for three months.

The sun glares through the slats of the hut, illuminating the steam from the cooking pot. This photo reminds me of the sounds, smells and atmosphere at my host home daily and the time spent getting to know each other. It soon became my place of comfort that I couldn’t wait to return to after our day’s work.

And alongside these photos, I was getting snaps on my digital camera. I focused on portraits and one of my favourites was taken on the day we attended a wedding in the next village. The image is of a girl of about 5 years old with her baby sibling on her back.

This was a common sight to see in the community, with girls from a very young age given the responsibility to look after their siblings, often carrying them on their backs.

ICS opened my eyes to education

After returning from my placement with ICS I had a lot of time to reflect on my time spent in Tanzania and where I wanted to go next. My journey opened my eyes to the importance of education and mental health.

Not only did the placement point me in the direction I wanted to go in terms of work but it helped me reflect on my lifestyle and how I could contribute positively at home. I’ve developed skills I never knew I had, opened up fantastic opportunities for my future and helped make the world a better place.

Our Wild Flower styled shoot has been featured as one of Magpie Weddings' top blogs of 2019!

Hello! Meet Harry, Oscar & Becca. Together we are Aurora Collective!